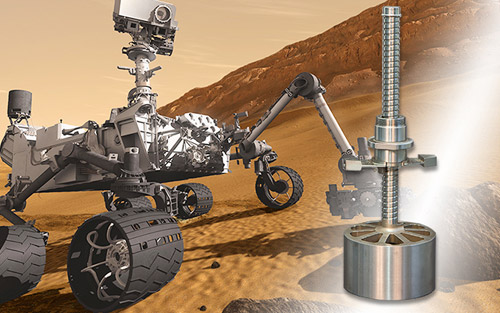 Thread-Craft, Inc. was contracted by NASA to manufacture the mission critical Drilling Arm Ballscrew Assembly. This ballscrew actuates the percussion drill mounted on the end of the robotic arm for the Curiosity Rover. This arm is used to drill into rock formations on the surface of Mars, with the intent of collecting and analyzing samples for material composition and potential signs of life.

Thread Craft's engineering department worked closely with the engineers at the Jet Propulsion Laboratory in developing the final design. This was a detailed and tedious process, and yet a closely coordinated effort. Product reliability was an absolute must, and thus assimilated into all aspects of the design and manufacturing processes. Thread Craft sent personnel to the Jet Propulsion Lab on more than one occasion to assist in the design effort.

One of the most complicated elements in the planning stages and the manufacturing processes was to maintain the radial orientation of intricate features on the ballnut in relation to the hub end of the ballscrew when the dog stops were engaged--all while simultaneously holding close tolerances on numerous other features. This required meticulous planning due to the timing of the ball thread in relation to these features. Additionally, this unit is driven with a very small and sensitive motor, therefore the assembly required an extremely smooth operating condition as well as critical positioning accuracy. This is literally a "one-of-a-kind" ballscrew assembly, which had never been built before and most likely never again. This assembly was manufactured completely on site at our state of the art, AS9100:2009 & ISO 9001: 2008 certified facility.The Ballscrew, Ballnut, and Ball Bearings were composed of 4150, 9310, and 52100 alloy steels that were induction hardened and carburized and hardened respectively.

The ball bearings were recirculated by way of a multi-path ball return liner that was located in a dovetail style groove and electron beam welded in position for reliability.Numerous processes were utilized to complete this project including CNC Turning and CNC Milling using our state-of-the-art machining capabilities and numerous precision grinding processes. Lastly, Internal and External CNC Thread Grinders were utilized for the precision thread grinding operations.

Tolerances were held to within .0001" for many of the critical features. Numerous tests were performed for quality and accuracy of features; concentricity, straightness, lead, backlash, running condition, and timing to name a few. Ten units were produced up to various stages in the manufacturing processes for risk mitigation; three units were completed and shipped to the Jet Propulsion Lab in Pasadena, California. Ultimately the Jet Propulsion Lab selected the assembly that was used on the Curiosity Rover based on months of rigorous testing. Thread Craft shipped on schedule and is extremely proud of our service to the Jet Propulsion Lab and our country's space exploration efforts. We look forward to working with NASA and the Jet Propulsion Lab again in the future.