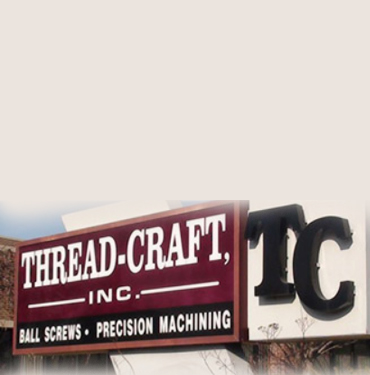 Early in the 1960s the majority of work consisted of worms, multiple starts, repair and new manufacture of acme screws and nuts thread grinding, turning and milling, and ID/OD grinding.  Jobs made complete to print began to make up a large percentage of Thread-Craft's work in the mid to late 1960's.  Three thousand square feet were added to the facility in 1967 in order to compensate for Thread-Craft, Inc.'s rapid growth and expanding product line.

In the 1970s, gages were removed from the product line and the focus became machine tool oriented.  Lloyd E. Johnson bought Ture A. Lindholm's shares in 1979 and became the sole owner of Thread-Craft, Inc.  The following year he rented a 3,000 square foot manufacturing plant located next to the existing facility to accommodate newly acquired turning and milling equipment.  Lloyd E. Johnson retired in 1984 and was succeeded by Dennis L. Johnson as President.  Thread-Craft, Inc.'s vision and commitment to quality continued.

During the 1980s, Thread-Craft, Inc. experienced continued growth due to the ability to provide superior quality machine tool components such as machine spindles, lead screws and nuts, fixtures, and a variety of other machine tool details quickly and accurately.  Ball screw assemblies were added to the product line in 1988.  Special machinery and equipment was purchased to manufacture the assemblies.  By 1993 it was apparent that Thread-Craft, Inc. would need an additional 3,000 square foot rental building to assemble and package the product.

By 1994, Thread-Craft, Inc. could no longer continue to grow in its 12,000 square foot facility.  The process of planning a new facility had begun.  It was determined that the office and manufacturing space would need to double, and production machines and material handling aids such as overhead cranes would be necessary.  In designing the new manufacturing space, the Company emphasized employee health and comfort, including climate control and a state of the art air purification system.

In the spring of 1997, the new 30,000 square foot plant was ready for occupancy.  By then, Thread-Craft, Inc. employed approximately 60 people.  The transition took place quickly and smoothly.  Once settled in the new 30,000 square foot facility, Thread-Craft, Inc.'s commitment to quality would drive the organization to a higher level, ISO 9001:2000.

Originally registered to ISO 9002:1994 in January of 2001, Thread-Craft, Inc. upgraded to ISO 9001:2000 in September of 2003, and is now currently ISO 9001: 2008 and AS9100 Rev. C.  We began our aerospace division in 2001 with a large aerospace OEM who could no longer find anyone with the capabilities to make their critical military ball screw components.  Due to our overwhelming success as an aerospace supplier, we expanded our Sterling Heights facility in 2005. In 2011, we doubled our engineering department, doubled our assembly area, built a state-of-the-art inspection room, and added new test facilities.  Today, our commercial and military aerospace production is a staple of Thread-Craft, Inc.